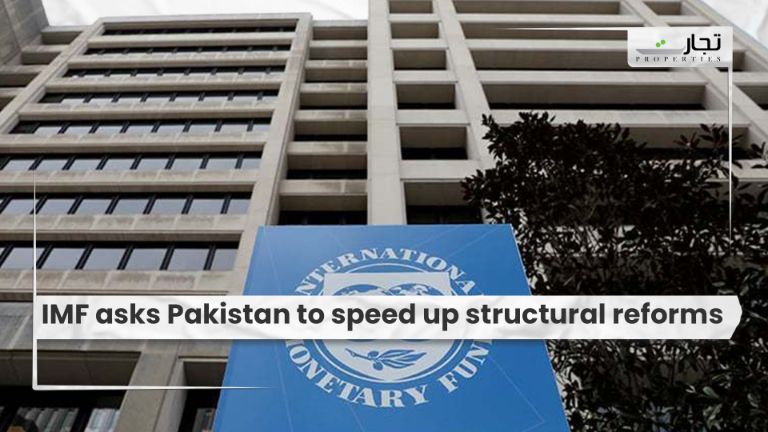 Islamabad: As per the latest news, the International Monetary Fund (IMF) has urged the country to speed up much-needed structural reforms while applauding Pakistan’s recent achievements in government institution reforms.

Higher growth, investment, and job creation would be crucially dependent on resolving long-standing systemic vulnerabilities, according to the IMF’s second, third, fourth, and fifth assessments of Pakistan under the Extended Fund Facility (EFF).

IMF noted, “An uneven playing field for State-owned Enterprises (SOEs) and private companies, corruption, and red tape (especially excessive regulations and licensing requirements, obstacles to paying taxes, and difficulties trading across borders and registering property) remain a drag on productivity, investment, and the development of a vibrant private sector that can create high-quality jobs for a growing labor force,”

According to the IMF’s staff report, which was prepared on March 24 for the executive board’s consideration after discussions with Pakistani officials about economic developments and policies under the program, the government’s recent achievements provide a strong foundation for speeding up structural reforms.

According to the paper, the government submitted a new law to parliament in March this year with the aim of defining a justification for state ownership, ensuring economically sound SOE operations, and controlling oversight and ownership arrangements.

Pakistani authorities also released a classification of all federal SOEs in March, dividing them into those that will remain in state possession and those that will be sold or liquidated. On this basis, the authorities are now preparing to progressively reduce the government’s economic footprint in order to promote productivity and reduce fiscal risks.

The IMF was told that the government’s current priorities in terms of improving the business environment, job growth, and green development include simplifying processes for starting businesses and authorizing FDI by reducing regulations and streamlining red tape.

Furthermore, in May 2020, the Companies Law was changed to encourage startups while also drawing innovators from around the world. “However, to expand Pakistan’s information technology, digitalisation and outsourcing sectors going forward, it will also be important to invest more in education and human capital, improve product market access, and increase information and communications technology (ICT) adoption,” IMF was informed.

Read more: Punjab has approved the construction of three hospitals for employees and their families

The IMF has also been briefed about the national tariff policy implementation. The international lending agency was also told about the National Electric Vehicle Policy, which is being introduced to provide a basis for achieving ambitious sales goals for electric cars before 2030, with the aim of reducing Pakistan’s GHG emissions and fuel import bill, as well as promoting industrial growth and job creation through new investments and the implementation of new technologies.

According to the IMF, the government’s priority steps for improving the efficacy of anti-corruption institutions include establishing an asset declaration framework by the end of June this year, with a focus on high-level public officials. Other initiatives include the release of the UN Convention against Corruption’s second evaluation period study and an international expert review of the institutional framework of Pakistan’s anti-corruption institutions.

Pakistan also pledged to improve the use of anti-money laundering (AML) resources to aid anti-corruption efforts as part of the loan program. Financial institutions should be effectively monitored to ensure that due diligence responsibilities for politically exposed individuals and suspicious transaction reporting are met, according to the IMF.