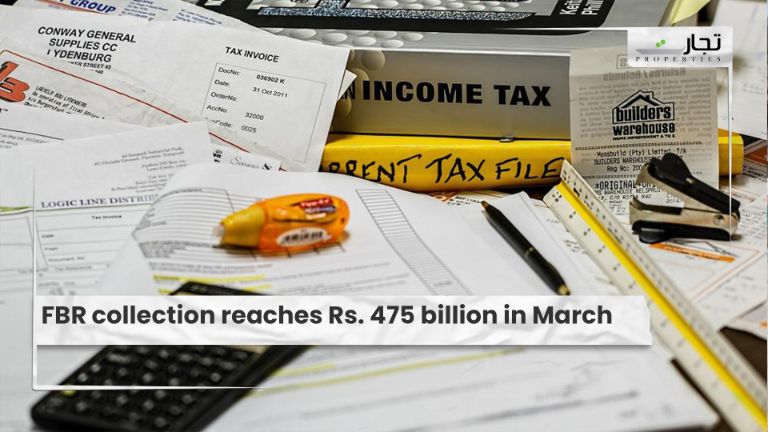 Islamabad: According to provisional data released by the tax authorities, the Federal Board of Revenue (FBR) exceeded its collection goal by Rs36 billion in March 2021, making it the highest monthly collection in the current fiscal year (FY21).

According to the numbers, the authority received Rs3,396 billion in revenue during the first nine months of the current fiscal year (9MFY21) against a target of Rs3,287 billion, exceeding the target by more than Rs100 billion. This represents an increase of about 10% over the Rs3,076 billion collected during the same time last fiscal year.

Similarly, the March net collection, against a necessary increase of Rs367 billion, represents a 46 percent increase from March 2020.

During the July-March period, income tax collections totaled Rs1.25 trillion, compared to a target of Rs1.29 trillion, resulting in a Rs39 billion shortfall. When compared to Rs1.18 billion collected during the same time last year, income tax collection increased by 6%. The tax deposited with returns was Rs51 billion, up 54 percent from the previous year’s figure of Rs33 billion.

Meanwhile, sales tax revenue rose 19 percent to Rs1.57 trillion in the first nine months of FY21, compared to Rs1.32 trillion in the same timeframe last year. However, the goal was set at Rs1.32 trillion, which was exceeded by Rs250 billion. During the period under study, the growth was fueled by an increase in fuel prices, an increase in imports, and a revival in economic activity.

Furthermore, customs collection for the period July-March this year was Rs546 billion, up from Rs492 billion the previous year, indicating a rise of 11%. For the period under review, the Customs target was Rs448 billion.

This sales output is expected to improve significantly between April and June 2021, compared to 2020, when economic activities were interrupted due to to the pandemic.

On this, PM Imran Khan tweeted, “I commend FBR efforts, achieving historic growth of 41pc in March-21 with collections recorded at Rs460 billion.” He added, “During July ’20-Mar ’21 our collections reached Rs3,380 billion which is 10% higher than the same period last year.”

The Federal Board of Revenue (FBR) reported on February 28 that it had reached its tax collection goal for the first eight months of fiscal year 2020-21, collecting Rs2,916 billion.

However, it was later revealed that the FBR received net revenue of Rs3,394 billion from July to March, compared to the target of Rs3,287 billion. This reflects an improvement of about 10% over the Rs3,076 billion received during the same time last year. The net collection for March was Rs475 billion, compared to a target of Rs367 billion, reflecting a 46 percent improvement over the Rs325 billion collected in March 2020 and 129% of the target.