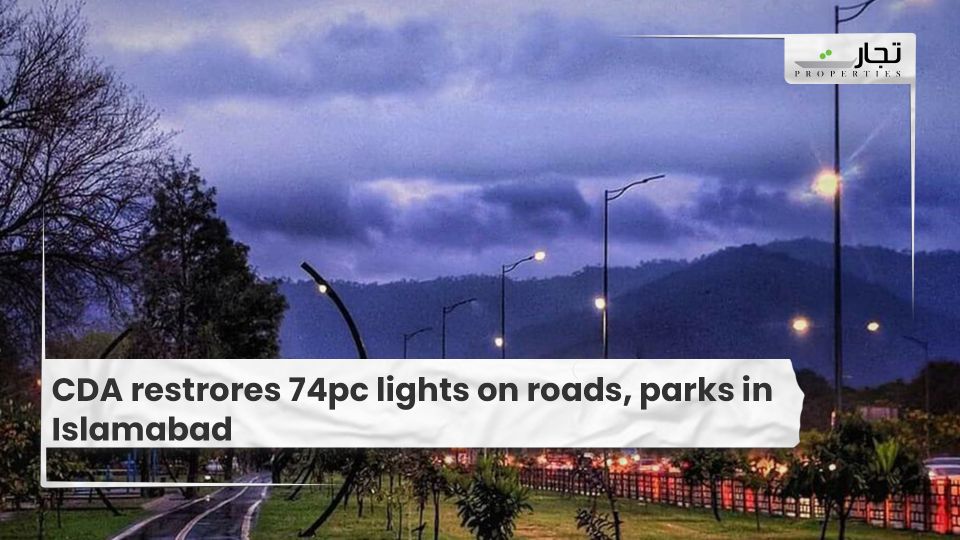 Islamabad: As per the latest news, the Capital Development Authority (CDA) said on Wednesday that 74 percent of the lights on highways, parks, and commercial centers had been restored.

“The civic agency has restored almost 80pc signals, and fixed lights in 60pc parks of the sectors of I, G, and F series, besides installing colorful lights in underpasses and bridges,” according to a CDA press release. The administration is committed to beautifying the capital, according to the statement.

According to the press release, old traditional lights have been replaced with new LED lights. Colorful lights are now being mounted side by side with LED lights at underpasses and bridges to improve their elegance, according to the CDA.

“Work on repairing old lights and installing the new lights at parks has been completed. Patrolling team of CDA is also restoring the street lights at various places. More than 10 vehicles and staff have been given the task to address the complaints of people,” it stated.

The CDA maintains over 40,000 streetlights and pays millions of rupees in estimated bills per month, despite the lack of a metering scheme. The CDA recently made an attempt to streamline its system in order to keep track of its energy use. According to a CDA official, the civic agency and the National Energy Efficiency & Conservation Authority met last month to discuss energy-efficient solutions for streetlights and water supply. According to the official, work is currently underway to make another 26 lights operational.