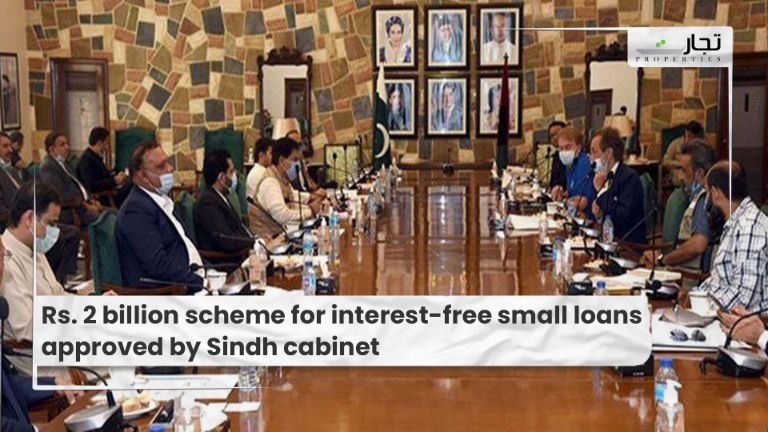 Karachi: According to the latest news, the Sindh government has agreed to introduce a Chief Minister Self-employment Scheme to provide citizens with interest-free small loans as part of a “pro-poor economic revival package.”

This decision was taken at a cabinet meeting held at CM House on Thursday, which was chaired by Chief Minister Syed Murad Ali Shah. Both provincial ministers, advisors, the chief secretary, and related secretaries were present at the meeting.

On the advice of the heritage committee, the cabinet approved a proposal for addition and modification of a heritage building by Homie Katrak Chamber, Plot CL-9/22/7, Abdullah Haroon Road-Hoshang Road.

The CM said, “This is the time to introduce a pro-poor economic package under which interest-free small loans may be offered to the people to start their small businesses or strengthen their ongoing business activities.”

The plan was accepted by cabinet members and given the name Chief Minister Self-employment Scheme. They all agreed that the discretionary allocation should be increased to serve a greater number of people.

To hammer out the specifics of the program, he formed a committee led by Planning and Development Chairman Mohammad Waseem and including the finance and law secretaries as members.

The meeting was informed that Akhuwat Islamic Microfinance, a non-governmental organization, offered interest-free loans to poor people to help them start small businesses. It was a 100 percent recovery rate for them.

The cabinet received a thorough briefing from the NGO delegate, and they requested that the P&D chairman meet with them and share their model with the cabinet at its next meeting, which will be held before Ramadan.

Read more: 250 bio-hybrid buses to be on road under BRT Red Line in Karachi

In light of the Supreme Court’s orders, Local Government Secretary Najam Shah told the cabinet that a billboard and hoarding policy had been drafted.

Billboards must be designed and mounted in accordance with the policy’s standard height, scale, and limitations, he said.

The provincial cabinet has approved a proposal to allot 13 acres of land to Jamia Islamia in Deh Tore, taluka Murad Memon, District Malir, for amenity purposes, at a cost of Rs10 million per acre. The District Price Fixation Committee has set the price of the property.

The Sindh Cooperative Societies Act-2020 had been adopted, according to the cabinet. A new special court will be created under the act to hear cases affecting the societies.

The cabinet instructed the cooperatives department to approach the chief justice of the Sindh High Court to request the creation of a special court for this reason.

The Sindh cabinet approved the Directorate of Urban Policy and Strategic Planning Unit as an attached department of the Planning and Development Board with a budget of Rs143.618 million, based on its results.

The Sindh government had been informed by Pakistan’s ambassador in China that the provincial government of Hubei wished to create a sister-province relationship between Sindh and Hubei province, as well as a sister relationship between Karachi and Wuhan. The Wuhan government has completed the internal process of naming a prominent square on the Yangtze Riverbank as Pakistan-China Friendship Square.

The cabinet was told that the Karachi administration would also take steps to name a prominent public square or road in a similar pattern as a reciprocal gesture of friendship.