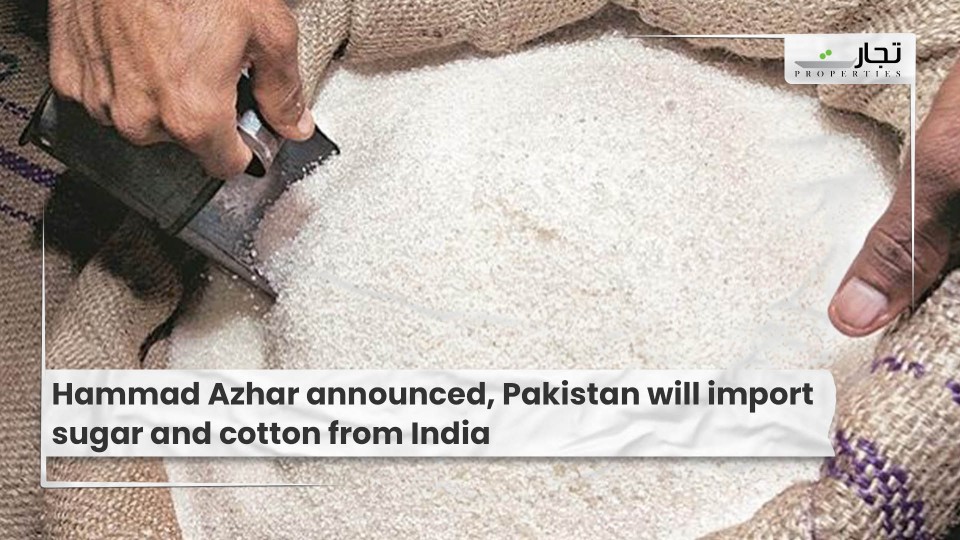 Lahore: The Economic Coordination Committee (ECC) approved the import of 0.5 million tons of white sugar and cotton from India on Wednesday.

Finance Minister Hammad Azhar announced during a press conference at the Press Information Department (PID). “The interest of the country and its citizens will be the basis of our decisions,” he said, adding that Pakistan imports cotton from all over the world except India, which is hurting the country’s small and medium-sized enterprise (SMEs) sector.

According to the finance minister, the country will begin importing cotton from India in June of this year. Previously, all countries except India were permitted to import cotton, yarn, and sugar.

As per information, the government has agreed to lift a nearly two-year-old ban on the private sector importing 0.5 million metric tons of sugar from India. “In contrast, the price of sugar in the two countries differs by Rs15 to Rs20. The decision was made because the price of the product in India is lower than it is in Pakistan,” Azhar clarified.

According to a local media article, Pakistani buyers have begun inquiring about purchasing Indian sugar and cotton, which is available at lower prices than other countries’ supplies. The minister also declared that petrol and diesel prices would be reduced by Rs1.5 and Rs3 per liter, respectively.

The finance minister also announced that the government would issue a Sukuk bond shortly, but he did not specify a date. “The current account deficit and foreign exchange reserves in Pakistan are both stable,” he said.

He said that the State Bank of Pakistan’s (SBP) reserves were built on borrowed money before the PTI government took control. “After we came to power, this money was cleared, and the reserves increased by Rs9 billion.” The Pakistani currency, according to the minister, is no longer dependent on dollars.

In response to a query about the recently passed bill to give the central government more autonomy, he said it was written with “global best practices” in mind. According to Azhar, the government will present it to Parliament for discussion, ensuring that all stakeholders are heard.

“The Parliament is sovereign; no other institution in the country is sovereign,” he said, adding that the government would amend the bill “with an open mind and an open heart” if it thought it was necessary.

Furthermore, the ECC meeting set the wheat minimum support price at Rs1, 800 per 40 kg, which Azhar described as a “relief for our farmer brothers.”