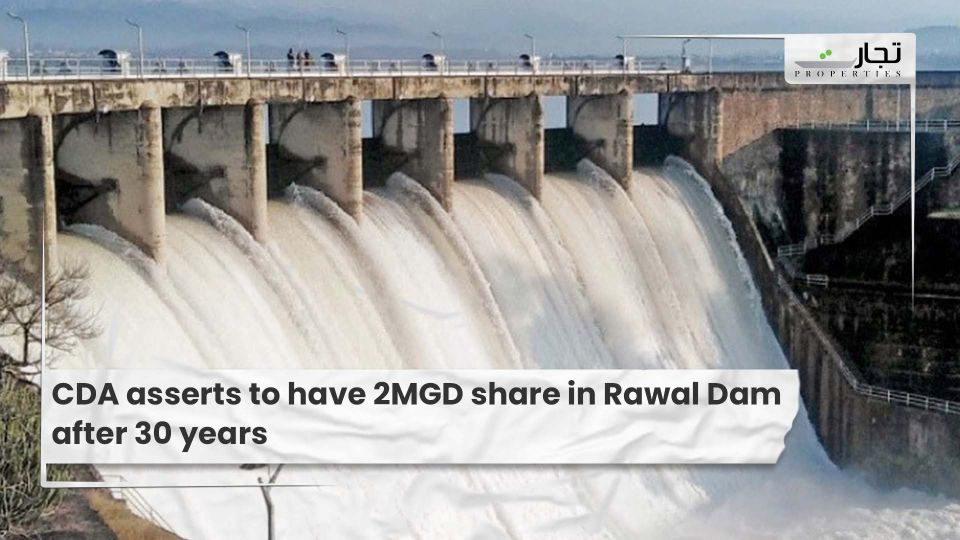 Islamabad: According to a news outlet, Chairman Amir Ali Ahmed of the Capital Development Authority (CDA) recently decided to reclaim a share of two million gallons of water per day from the Rawal Dam after 30 years.

Read more: CDA’s production work is being investigated by a Supreme Court judge

Mr. Ali said that sufficient water supply was available in the past from the Simly and Khanpur Dams, as well as deep sunk tube wells, which is why the CDA had refrained from claiming the aforementioned share of water for 30 years.

Asif Ali, a CDA spokesman, said the CDA is currently supplying 60 million gallon per day (MGD) to residents in the federal capital. The tubewells provide 24.5MGD, and the Simly water reservoir provides another 24MGD. The Khanpur Dam and three waterworks in Shahdara, Nurpur, and Saidpur respectively contribute 8.5 and 2 MGD. Rawal Dam will add another 2MGD to the water supply, assisting the authorities in providing water to residents in sectors G-7/4, I-8, and I-9 to G-9.

The treatment plant in ‘Park District,’ near the Sports Complex, which had been out of service for 30 years, was now operational, according to the spokesperson. A new power generator has also been built to ensure that no water is lost due to a power outage.

In recent years, officials from the CDA’s Water Supply Directorate have placed a greater emphasis on deep sunk tube wells, which they describe as the capital’s largest sources of water. To draw more water, a number of these were sunk deeper. Finally, the CDA chairman instructed officials to follow the ‘Wetlands projects’ more vigorously because they would assist in the cleaning of polluted water and the recharge of subsoil water. Lastly, in order to increase the yield of trapped rainwater, the ‘Rainwater Harvesting’ project was given priority.