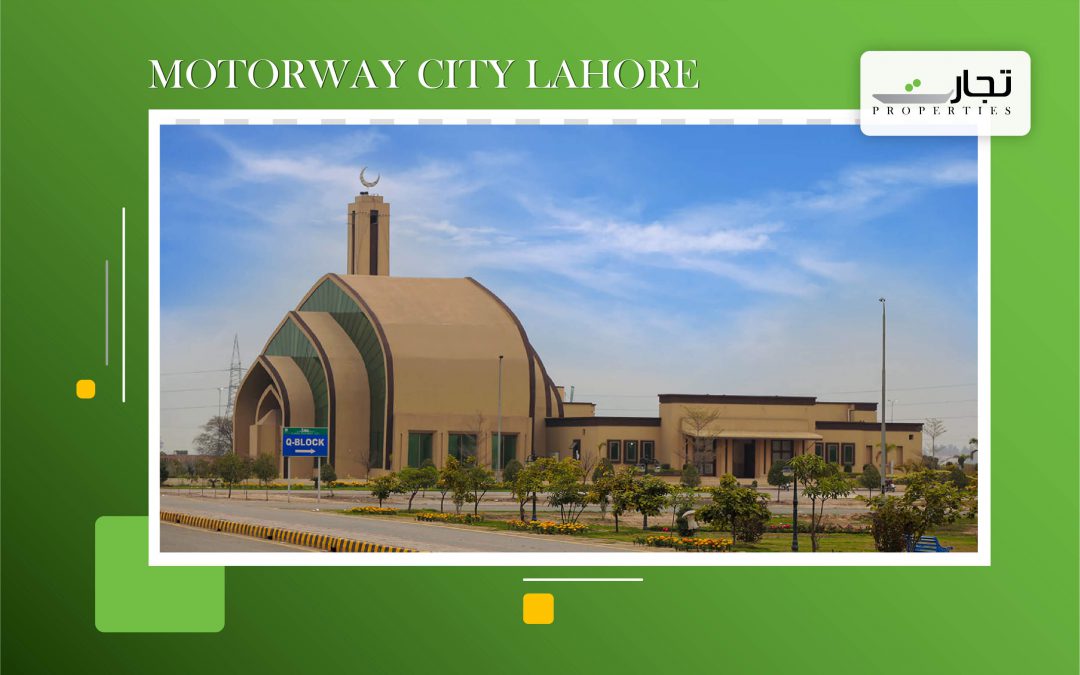 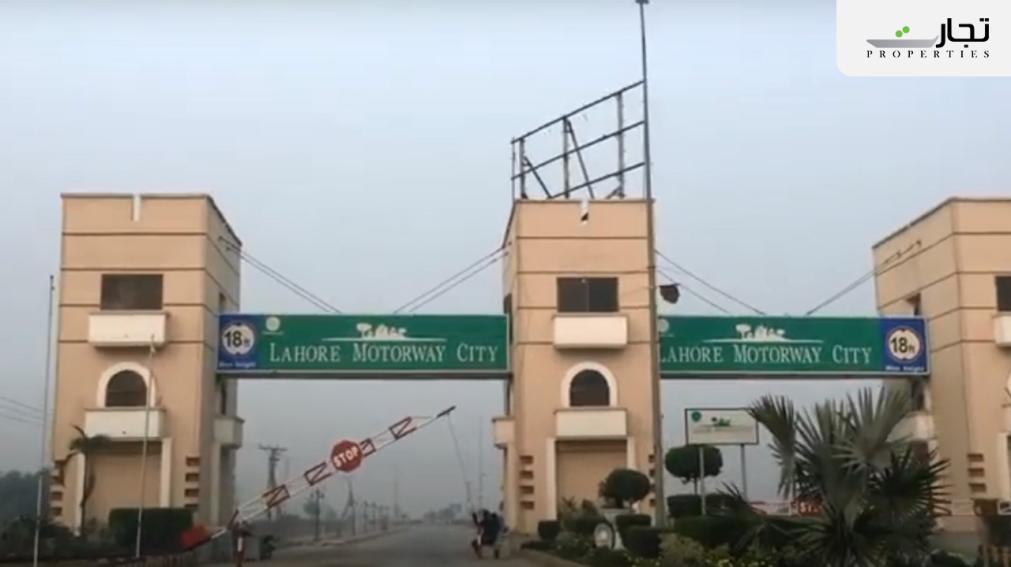 Motorway City Lahore is a very luxurious and secure housing society approved by LDA, situated in Lahore. As the name suggests, it is built beside the Motorway (M-2). The housing society offers a wide variety of plots at highly reasonable rates.

The project was initiated around 2008 and is led by Renaissance Group. The project got its approval for the gas supply way before the initiation of the project.

Since the establishment of Motorway City, the project has made many developments. It intends to make even more so that the residents continue to enjoy a luxurious lifestyle in society’s premises.

Motorway City Lahore is a project by Renaissance Group. The Renaissance Group is comprised of efficient, innovative, and professional officials. This enterprise is very able to plan, executing, and administrating projects.

The city developers have proved themselves as reliable due to their comprehensive analysis of land use, general investment profitability, and contribution to national requirements particularly.

The company intends to make great profits by gaining the confidence of its clients and high-quality development standards. The company’s chief of executive accepted the 28th RCCI Annual Achievement Awards in 2015 for the year’s best businessman.

The Motorway City is a known project for its legitimacy; it has all the consent forms and NOCs. These NOCs have been approved by Lahore Development Authority (LDA). The Motorway City also has an approved NOCs for electricity and gas as well.

The Motorway City is situated in Kot Abdul Malik, alongside the Motorway (M-2). 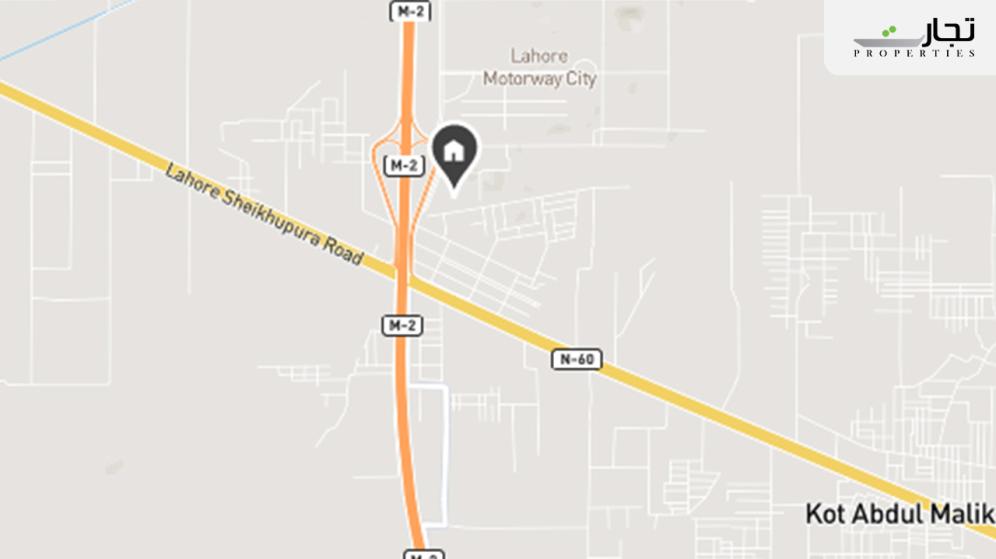 The nearby landmarks and places are the following:

The main accessibility points are enlisted below: 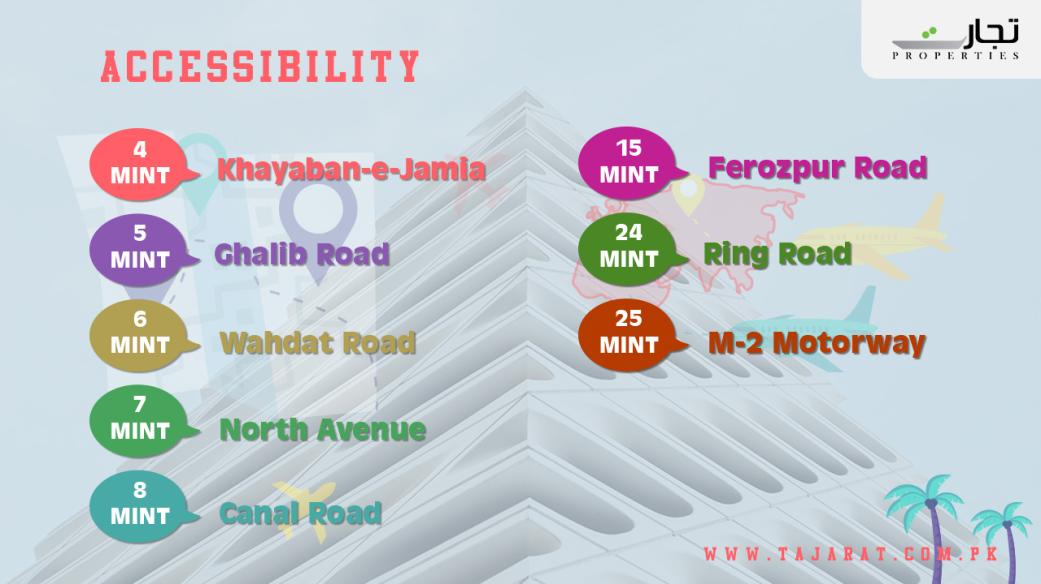 The residents enjoy a very lavish and comfortable lifestyle within the premises of the society. The residential community is developed in a very modern manner, and further developments would be done according to the latest design.

There are also several parks and gardens located in most parts of the Motorway City that help enhance the city’s beauty, plus they assist in controlling the pollution. The developers have planned to add more gardens, parks, and playgrounds to society’s infrastructure. The main goal is to maintain an eco-friendly environment inside the Motorway City.

In Motorway City, residential and commercial plots are up for sale in various sizes and at very affordable prices. The Motorway City offers very remarkable opportunities for getting plots at reasonable prices to the investors and the people who want to own their own houses. It even offers a very easy-to-follow installment plan for those who cannot pay the plots’ cash at once.

The roads and streets of the residential society have been made very wide and open, to avoid accidents and traffic jams. 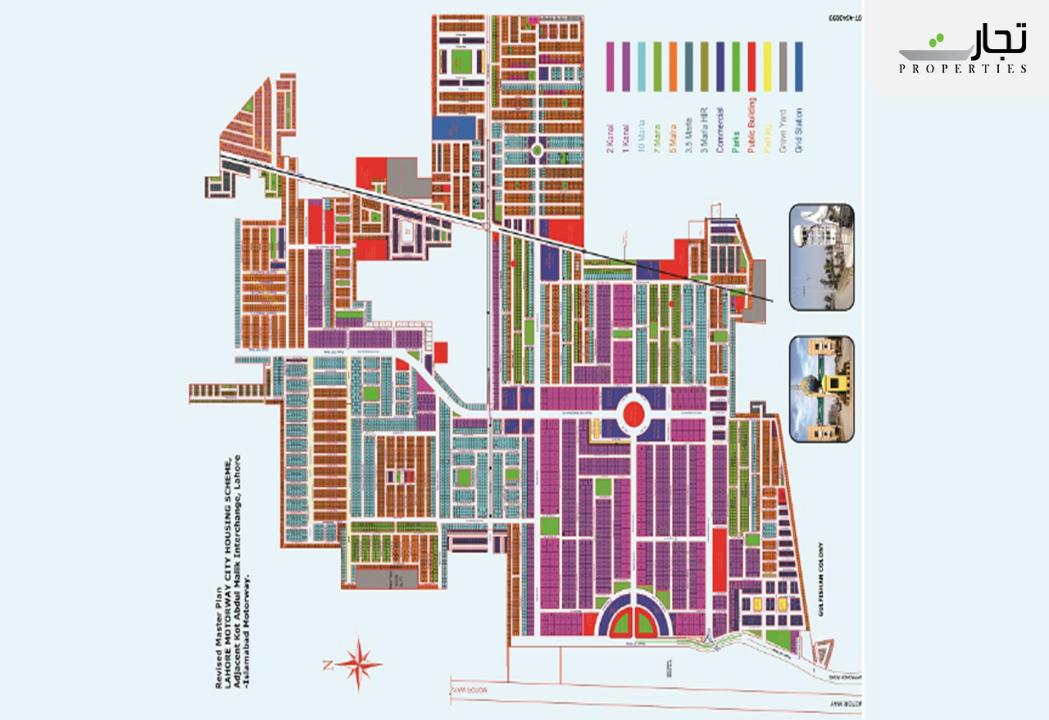 The Motorway City covers many areas, which is why it is divided into many blocks. The residents in each block can easily access shopping plazas, pharmacies, mosques, and food courts. Following are the names of the blocks:

The Trust Prime Block is further divided into T Block, T Prime, and T extension. The blocks are then further categorized into several streets, which are almost 40 feet wide. There is also a park situated in each city block, where people can have a good time with their friends and family.

The Motorway City Lahore offers residential as well as commercial plots at highly reasonable rates. The sizes of residential plots are as follows:

The rates of these blocks range between 9 lac to 40 lac.

The residential plots are offered at very reasonable rates; the booking rate is merely 10 percent of the total amount. The residual payment can be paid in installments for 3.5 years. Moreover, the developers have taken the initiative to build at least 1,000 houses inside the society. The area of these houses would be as follows:

The commercial plots of the following sizes are available for sale in Motorway City:

A huge area is also available for building a commercial plaza. 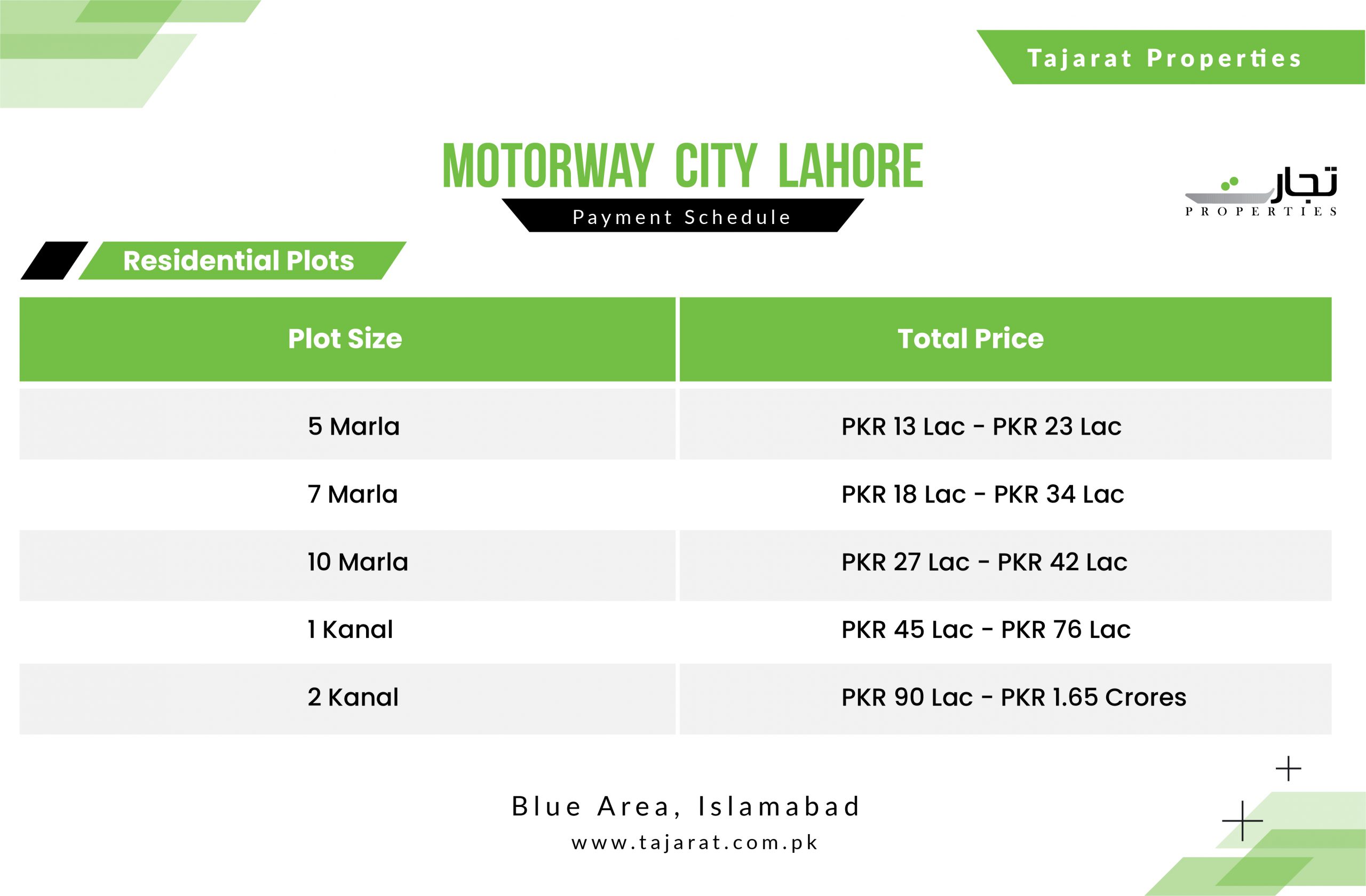 The Motorway City provides the residents with every basic need, including gas, water, and electricity. The power and gas supply is consistent in the society, and the pure water is supplied to the residents 24/7. All the blocks of the city enjoy these facilities.

The Motorway City provides a high sense of security to its residents as the residents themselves can observe that the society does not take any chances or risks when it comes to the occupants’ safety.

The main entrance of the housing society is gated, and it is also equipped with go-through gates to ensure that no unauthorized persons can enter the community’s premises. The Motorway City has also installed a large number of CCTV cameras to monitor society’s security.

The armed guards keep on patrolling the surroundings of the society as well. Fortunately, the housing society’s premises are well-secured due to the boundary walls.

The developers of the city have planned to build an eco-friendly housing society. For this purpose, they have dedicated a large portion of the land to the construction of parks, gardens, playgrounds, and golf courses.

There are various parks and playgrounds already built in the housing society’s infrastructure, and more of them are under the construction process. The city has also constructed two of its nurseries for the residents.

Motorway City has many grocery stores where people of the city can buy all the essential items for their daily use. Several up-to-date shopping centers in the town provide the residents with various clothing stores, shoe shops, book stores, mobile shops, jewelry stores, restaurants, cafes, and playing zones for the kids.

Other important shopping centers are also in the vicinity of the housing society.

The city facilitates its residents with numerous mosques constructed in almost every block so that the residents do not get late for their prayers. The Jamia Masjid of Motorway City has a very splendid façade, and it is one of the town’s notable infrastructures. There are several other mosques situated in the proximity of the housing society. 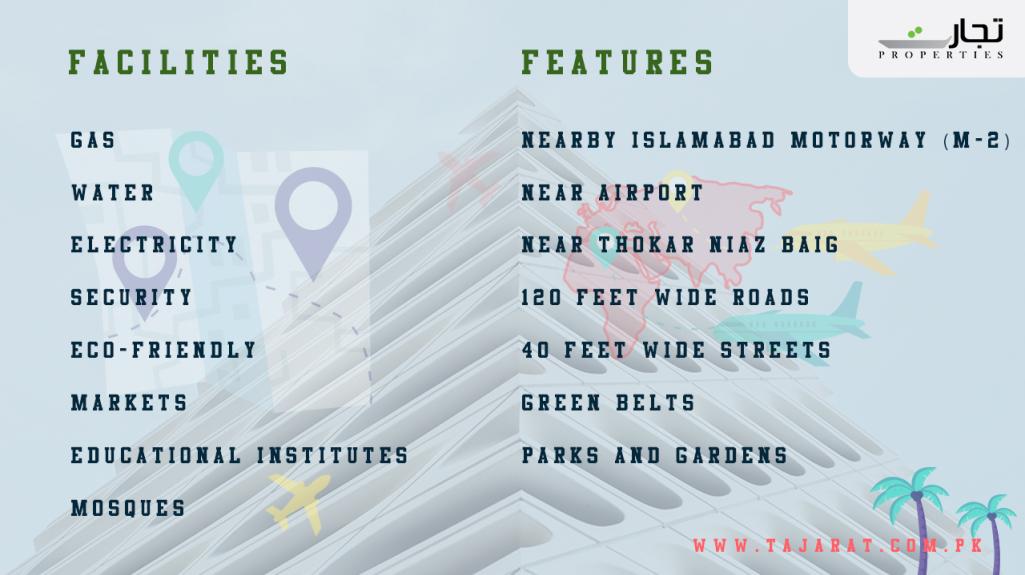 The salient features of the society are the following:

Why invest in Motorway City Lahore?

The housing society is built near the Motorway (M-2), and Lahore International Airport is nearly 12 minutes’ drive away from the housing society. Moreover, The residential and commercial plots are accessible at very affordable rates. It provides excellent opportunities for investors to make huge profits.

It is a legal society and has NOC that LDA approves. It is equipped with all the basic facilities. The roads and streets are wide and spacious. The environment is highly secure and comfortable.

Guidelines to Follow Before Purchase in Motorway City Lahore:

Kindly make sure to verify all the documents and proceed only if you are delighted. Before buying any property, do inquire about the approved NOC of the housing society by LDA. By doing so, all your documentation will be valid in every way that might offer the satisfaction of the customers.

Before finalizing any deal for buying the property, kindly ensure that you have enough funds to purchase it. In this way, there will not be any issue regarding the purchase of the property.

Q1: What is Motorway City Lahore?

Ans: It is located nearby Lahore – Islamabad Motorway (M-2).

Ans: Motorway City is a legitimate project, and it possesses approved consent documents and NOCs.

Q4: What types of plots are available in Motorway City?

Q5: What areas of plots are available in Motorway City?

Ans: The residential and commercial plots of 3 Marla, 5 Marla, 8 Marla, and 10 Marla are available in Motorway City.

Motorway City Lahore is a beautiful and successful housing project situated near the Motorway (M-2). It is a project led by Renaissance Group, which is known for its quality performance in development.

The housing society offers residential and commercial plots of different areas and at exceptionally affordable rates. It also has a very easy-to-follow installment plan. The residents fancy living in such a beautiful, facilitated, comfy, and safe environment. Hence, Tajarat Properties recommend you investing in Motorway City.